As you may remember, at the beginning of 2022, there was a push for the salary of travel nurses to be capped and we gave you the overview back then here. Now, we are going to revisit this topic and take a look at what has transpired since then.

A letter from several members of Congress from both parties made it to the White House urging them to propose legislation to put a cap on travel nurse salaries. They cited reasons such as price gouging and being unable to retain staff nurses due to the high wages of travel nurses.

The initial response from the nursing community was not positive as you may expect.

So what has happened since then? Well, immediately several petitions to show opposition to any legislation regarding salary caps were circulated by organizations like Change.org. All of the petitions received tons of signatures and several nurses voiced their opinions on social media platforms as well.

Besides discussions of opposition throughout the nursing community, there haven’t been much in terms of further updates.

As of this writing, no official federal legislation has been proposed for a vote. The topic has been pushed aside regarding federal initiatives since the original letter.

When it comes to state legislation, Massachusetts and Minnesota still currently have legislation that caps travel nursing pay each with different specifications.

Additionally, the bill proposed by Representative Timothy Bonner of Pennsylvania that we reported on earlier this year is still in discussion and has not been passed as of yet. If it is passed in the future, Pennsylvania will join Massachusetts and Minnesota with pay caps. 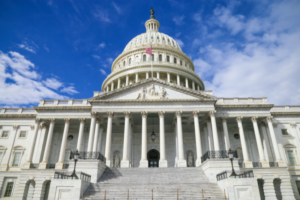 Now though not directly in response to the initial letter, one current event that has happened since our last update that further shows objection to the possible legislation, was the Nurse’s March on Washington at the U.S. Capitol.

On May 12th, 2022,  nurses from all over the country descended on the Capitol steps to protest against the perils of the healthcare system in general. However, resistance to salary caps and fighting for better staff nurse pay were two prominent concerns of the attendees among other big ones like safe staffing ratios.

Though nurses are in support of legislation for certain things like staffing ratios, implementing a federal cap for travel nursing pay would not be heading in the right direction for addressing the concerns of nurses. Luckily, since nothing has officially been drawn up at this point, this is a fight that can be postponed for another day.

What legislature would you like to see as a nurse? Let’s start a conversation.

Katelyn has a Master’s in Healthcare Administration and five years of clinical experience. She has made the shift to full-time freelance writing and enjoys covering topics on nursing careers, lifestyle, and community. Her goal is to help start a conversation and spread awareness around the many ups and downs of the healthcare field.

Hand Hygiene: Shocking Statistics & How To Take Care of Your Hands

We’ve done the math on how many times nurses perform hand hygiene, plus some shocking facts and a few tips on how to take care of your hands as a nurse.

Celebrate Pediatric Nurses Week as we talk about what pediatric nurses do, ideas for showing appreciation, and a breakdown of how to become one. Don’t miss this!

Ever wonder, what is with nurses and coffee? I mean, why do nurses love coffee? So many of us depend on that rich, hot java to jumpstart a shift.